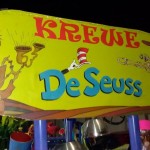 We come with our bright feathered hats in our fuzzy fur hands,
To ask for donations from Krewe de Seuss fans.
We know you’re not rich, but one dollar is better than nothing at all.
Because a donation’s a donation. No matter how small.

“You can’t do anything with a dollar in this day and age.”
Is something that you’re probably likely to say.
But a buck is sometimes all that it takes
To make many of the things Krewe de Seuss needs to make.

For a dollar puts a star on the belly of a Star Bellied Sneetch.
It can add a nozzle to a Two-Nozzled Bloozer, so then it has Three.
It can buy a sock for One of the Fox in Sox’s Four Feet.
For a dollar’s much more than you’d think it might be.

A dollar is more throws that might not otherwise have been caught.
It puts stripes on some places that mightn’t have not.
You see, a dollar is much more than you’d think.
It can buy some of the beers that The Nerd ought to drink.

A dollar buys bolts for the Boom Band Cart.
You know, the bolts that keep it from falling apart.
It could be a feather on Barthomew Cubbins’ hat.
Lorax Mustache Wax, or something like that.

No matter how small…

“With my trusty Bootsy Lute in hand, you can be sure that I'll be cookin' up them tasty vittles!